During partition, under the orders of their then Satguru Pratap Singh, the Namdharis migrated from Pakistan and settled in the village Jag Majra in Sirsa district. Now, a majority of the population of Jag Majra belongs to the Sikh sect. Sri Satguru Jagjit Singh Ji gave the village its new name, Sant Nagar. In official records, the name still exist. as Jag Majra, but the village is popularly known as Sant Nagar. In the area adjoining Sant Nagar, them are 18 Namdhari villages. Excluding Harpreet Nagara, all the Narndhari players who represented India in junior and senior-level tournaments hail from Sant Nagar. Harpreet belongs to a nearby village.

We are at the entrance of India’s newest hockey nursery, the nondescript village of Sant Nagar, 55km from Sirsa towards the Rajasthan border on state highway 32.

The immediate task is to locate the residence of the national hockey team’s newest wonderkind, the 19-year-old Malak Singh. We stop at a confectionery shop at the very entrance of the village. Before we could explain our situation the elderly shopkeeper answers all our queries.

“Here every youngster plays hockey, there’s a lot of competition from within … my younger son is also a goalkeeper and recently played in the senior nationals… even the captain of the national team Sardar Singh is from this village… please tell me the name of the hockey player you are looking for and I will guide you to their residence.”

In the village of around 1,200 houses, mostly belonging to the Namdhari Sikh sect, it wouldn’t be an exaggeration to say that each house has a hockey player.

Their association with the sport can be gauged by the fact that the Indian team that recently won the silver medal in the Asia Cup, had three players, including the skipper, from this tiny hamlet.

Sardar Singh, Malak Singh and Gurmail Singh, all honed their skills at the village’s hockey academy, housed at the Shri Guru Hari Singh Senior Secondary School in the village.

“Like any other kid in the village, we too were drawn towards the sport by watching our seniors playing. Most of our teenage years were spent on the grassy hockey field of the village. Today we are proud to contribute our bit to the village’s hockey tradition,” said Malak.

Inspiration point
If Malak and Gurmail drew inspiration from their senior Sardar, the present India captain, in-turn, turned to elder brother Didar, who was also an international payer and represented the country in the 2006 Doha Asian Games.

“In our village, hockey is even more popular then cricket. In the evening you will not find even a single kid roaming around the village, the hockey ground will be packed to the rafters,” says Sardar.

Since the time Didar Singh senior, who played at the 1992 Barcelona Olympics, became the first international from the village, 15 players from the village have made it to the junior and senior national teams.

“Due to the efforts of our late Guru, Jagjit Singh ji, and his nephew Thakur Uday Singh ji, Sant Nagar has found a unique place in the country’s hockey map. The sport hass also provided a source of employment for many from the village. Around 50 village youths have got jobs in the various government and private departments,” said Gurmej Singh, chief coach of the village hockey academy.

There are three coaches in the village and the entire expense of the set-up is sponsored by Namdhari Seeds Limited.

The route to the top is also well-mapped-out. After honing their basic skills at the village academy, the players are shifted to Namdhari’s centre of excellence — at Bhaini Sahib in Ludhiana — where they have their own synthetic hockey astro-turf and sports hostel equipped with all modern facilities, including air-conditioned halls and a multi-gym.

Dress code
The hockey players in the village are easily distinguishable owing to their unique dress code. The religious values of the Namdhari sect dictate many aspects of their life including their on-field attire – kacheras are used instead of shorts and they cover their head with a dastar.

“We’ve relaxed the dress code for players at the international level by allowing them to play in shorts, but even then they are advised to wear kacheras under the shorts. For domestic hockey we still wear the traditional outfit,” said Baldev Singh, a former hockey player form the village who is currently working as a physical education teacher in Sirsa.

How it all started
The 1975 World Cup triumph inspired Thakur Udhay Singh, now the head of the sect, to promote hockey in the village and a year later the Namdhari XI was formed. In the same year a hockey training centre was inaugurated at the village school.

The centre really took off in Baldev Singh’s two stints (1980 to 86 and 1990-94), winning a number of national level tournaments, including the junior Nehru cup in 1980. The success of the current bunch just proves that the successful is one that is still being written. 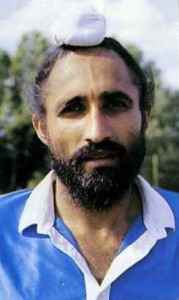 HOMETOWN HEROES
This trio from Sant Nagar are key players in the national team:
– SARDAR SINGH (27): Captain of the Indian team, plays at mid-field. He is a CISP in Haryana Police.
– MALAK SINGH (21): Made his senior debut in 2013, plays as a forward. He is working with Western Railways
– GURMAIL SINGH (21): Made his senior debut in 2013; plays at centre half He is working with Punjab and Sindh Bank 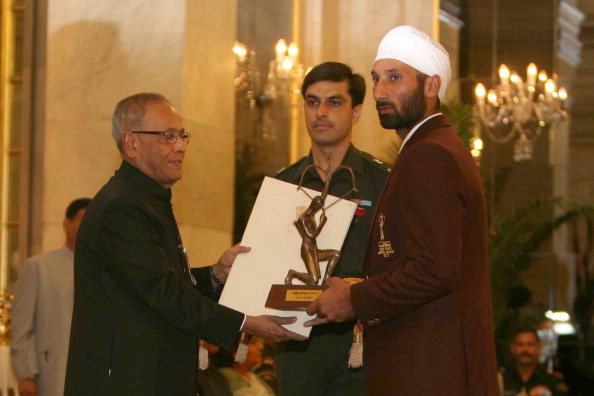 Namdhari XI is one of the most unique hockey sides in the country. They are easily recognisable with their spotless white turbans and uniform. All members are strictly vegetarian and inspired by the warrior spirit prevalent in the sect. They believe in giving everything on the pitch and having no regrets. The passion is infectious. The 1975 World Cup triumph led to the birth of the Namdhari XI. Since then, they have enjoyed a lot of success — at both national and international level. They have gifted the national squad quite a few players, including Malak Singh, Gurmail Singh and current captain Sardar Singh.

Speaking in 2015, the coach of the side, Didar Singh, who represented the Tricolour at the 1992 Barcelona Olympics quotes . “Earlier, the dress code used to be very strict, with all players having to wear ‘Kachera’. Now the rules have been relaxed, with players wearing shorts. But we still insist on the traditional attire during local tournaments. The entire contingent made sure to follow all rules of their religion. We  bring our own cook and only have that food. Milk products are our main source of nutrition,” Didar added. “Everyone in our village is a hockey fanatic. You won’t find kids playing cricket there. We catch young kids with potential and start training them in our own nursery academy. “If they prove to be good enough, they are then sent to Namdhari’s centre of excellence — at Bhaini Sahib in Ludhiana — where they hone their skills on synthetic turf. Sports hostel equipped with all modern facilities, including air-conditioned halls and a multi-gym, are also there.  We’ve started age-group training to make sure our squad is always full. Santa Singh, a junior international, is our next gift to the hockey fraternity”

Sponsored by Namdhari Seeds, a multi-national corporation based in Bengaluru, the team participates in more than 10 tournaments around the year including famed tournaments like All-India MCC Murugappa Gold Cup.  The Surrey Cup, Canada and Cal Cup, US are some competitions they take part in internationally.