SRI Satguru Jagjit Singh Ji took the command of spiritual and temporal affairs of the Namdhari community from his father and predecessor Satguru Partap Singh Ji in 1959 when the Namdhari community was passing through the political and demographic convulsions of the Partition of Punjab in 1947. Like their counterparts (Hindus and Sikhs), thousands of Namdhari Sikhs were uprooted from their native places of West Punjab and were forced to migrate to East Punjab. They were in search of homes and hearths. For their rehabilitation, Satguru Partap Singh Ji founded several colonies in East Punjab. Principle among them are now located in Sirsa (Haryana), Mandi (Himachal Pradesh) and Beer Bhamarsi (Patiala). As ill-luck would have it, he departed from this world leaving the task of resettlement projects to his successor. Satguru Jagjit Singh Ji not only completed this task but also provided infrastructure for administration, congregation, music. sports. education, health and transportation in these establishments. It was due to his sustained efforts that Sri Bhaini Sahib assumed its temporal and spiritual grandeur. Satguru Partap Singh Ji bequeathed his son a legacy of freedom struggle, which was initiated by his great grand predecessor – Satguru Ram Singh Ji in the late nineteenth century and liberal and non-sectarian politics. He also made a pitch for Namdhari Sikhs in the pan-Indian political space. Satguru Jagjit Singh his enriched this legacy and subscribed to the concept of National unity and integrity. He believed in the concepts of co-existence and communal harmony. Simultaneously, he promoted Punjabi language and culture and kept distance from communal violence and separatist politics. 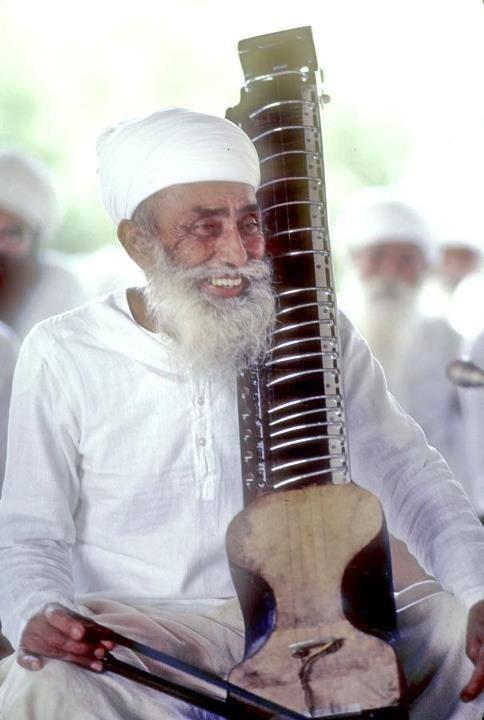 Another feature of Satguru Partap Singh’s legacy was devotional music for which he engaged the services of the then Ustads for imparting training in vocal and instrumental music. Satguru Jagjit Singh further enriched this legacy. lie also engaged the services of prominent Ustads representing different Gharanas of Shastriya Sangeet. Among them are Pandit Shiv Kumar (Santoor), .Ustad Amjad Ali Khan (Sarod), Pandit Ram Narayan (Sarangi), Pandit Kishan Maharaj (tabla) and Mishra Bandhus etc. Several Namdhari youngsters were trained by these Ustads. As a result of rigorous training and dedication, a number of Namdhari Sikhs have emerged as the exponents of the Shas-triya Sangeet.

Being a puritan, he ensured that maryada of Naam-Simran, earning livelihood by honest means, piety and teetotalism was observed by his followers individually as well as collectively. He exhorted them to perform and participate in the collective congregations called Jap Prayog, Varnis, Havans and Holas at Sri Bhaini Sahib Headquarters and Namdhari Dharamsalas. He was equally concerned about the adverse effects of the modern education and culture upon the youth. He noted that youth exposed to the modern culture, particularly television media, has a tendency to emulate Western lifestyle and indulgences like trimming hair and beards, smoking and consuming liquor. For him., the consumer-culture, particularly lavish lifestyle, rituals and customs bore the serious threat of cultural alienation. Through his religious dis-courses, he exhorted the Namdhari parents and youth to observe the Namdhari dress code and eating taboos. Addressing to these concerns and challenges, he revamped institutional arrangements for observing Namdhari marayada related to birth, marriage, death and all occasions of celebration.

Under the aegis of their Satguru jagjit Singh Ji, the Namdhari Sikhs gave adequate attention to preserve historical sites and buildings. They took control of these places and developed them into centres of Namdhari heritage. Such important centres are now located in Amritsar, Ludhiana and Malerkotla. They also constructed a number of Namdhari parks and round-abouts and persuaded the then government to dedicate some roads to Namdhari Gurus and martyrs. Besides, for constructing and legitimising the Namdhari identity, Satguru Jagjit Singh patronised several scholars and writers.

For the Narudhari Sikhs, Satguru Ji was their spiritual and temporal master. They believed that He was the only one who could judge their right and wrong actions and com-mand them to lead their life accordingly. They strongly believed that he could liberate them from their sufferings and sorrows and learnt to take them as their Satguru’s will, They had staunch faith in Him and sought His spiritual guidance and blessings.

Satguru Jagjit Singh’s demise has left a spiritual void difficult to fill up. Equally difficult is to guide the Namdhari community in the temporal affairs, to preserve communitarian cohesion and Namdhari Maryada in the context of the industrialising economy and rapidly growing consumer culture. With Satguru Jagjit Singh ji’s blessing, we pray and trust that his successor Reverend Uday Singh Ji would surmount these temporal challenges.