Sat Guru Jagjit Singh, the chief of Namdhari Sikhs, was a true symbol of puritan way of life. He showed the righteous path to his followers for over 50 years both in India and abroad.

In his passing away the spiritual world has lost a great religious teacher and a reformer.

Following on the tradition of Guru Nanak Dev ji, the first Sikh Guru , Sat Guru Jagjit Singh, preached  Namdhari Sikhs to practice Nanak’s three cardinal Principles of  Nam Japo (remembering the Name of God through meditation) Kirat Karo (Earn an honest living), andVand Chakko (Sharing your income with the needy or giving to charity). Namdhari Sikhs embraced these principles in their lives in letter and spirit. It is on account of this why Namdhari Sikhs are very God fearing, hardworking, charitable, prosperous and generous community.

During his time as chief of Namdhari sect, Sat Guru Jagjit Singh, tirelessly worked towards getting due recognition to Sat Guru Ram Singh’s pioneering contribution to the freedom movement of India.

In his life time Sat Guru Jagjit Singh eradicated many social evils prevalent in society. He primarily achieved by preaching his followers to meditate on Naam Simran and follow the teachings laid out in the Adi Granth Sahib Ji and teachings of other Gurus.

He called upon his followers to abstain from Alcohol and be pure vegetarians. Sat Guru Jagjit Singh believed in gender equality. He strongly condemned female infanticide prevalent in large swathes of Northern and other parts of India. He simplified the institution of marriage and eradicated the scourge of dowry system.

A great humanitarian and a philanthropist Sat Guru Jagjit Singh was also an ardent lover of Nature. He preached for the protection of flora, fauna and the environment.

Sat Guru Jagjit Singh was a champion of inter-faith dialogue and harmony. He was a crusader of world peace and dreamt of a world free from violence and war.

The best tribute one can pay to Sat Guru Jagjit Singh is by following the path shown by him.

When I try to invoke the picture of Mahatma Buddha while reading his life-story that he had renounced his kingdom and roamed in the jungles to find the meaning of life and death. I am not able to see the Buddha from any of his available pictures or statues. But, while looking at the photograph of Sn‘ Satguru Jagjit Singh Ji, I felt that the Enlightened Buddha, who conveyed the vast meaning of life through very small things and facts, must have looked exactly like him. On seeing Sri Satguru Jagjit Singh Ji, I was convinced that the fearless and mighty holy men, sages, saints and Gurus must have looked like him. Contemplating this, your minds automatically bows before him in respect.

It is with great shock and sadness that Vishava Hindu Parishad received news that the Most Reverend Namdhari Panth Pramukh Param Poojya Sadguru Jagjit Singh Ji Maharaj found his peace and left the world today ! His departing is a great loss to the Hindu society in general and the Namdhari Samaj in particular. Please accept our deepest condolences !

His passing away is also a great loss to Vishav Hindu Parishad as he was the last surviving member from amongst the illustriuos founding fathers of this global body of Hindus. The Parishad and its Hindu consolidation programmes and projects, and especially our Cow Protection Movement, always got his blessings, encouragement and support. He was the embodiment of the Namdhari Tenets such as Truth, Purity, Simplicity, Peace and Unity. He was a great son of Maa Bhaarati and the global Hindu Samaj that accounts for l/ 6th of the 7 billion world population will always miss him. He will ever be remembered with love and pride especially by the lovers of the causes of Cow Protection, Vegetarianism, Swadeshi and Patriotism.

We can imagine how intensely you and the Namdhari Privar would be feeling his absence !

We know the philosophy of  “Jaatasya hi dhruvo mrityuh” (“that which is born must die” – Gita 2/27) won’t give solace at this time of extreme grieft. However one has to bow before the inscrutable designs of the Almighty ! “Na Hi Kalyaana Kruta Kaschit, Durgatim Tat Gachchhati”! (“There is never any loss to an altruist in the cosmic scheme who engages in auspicious and spiritual activities.” – Gita : 6/40)

Our best homage to Brahmaliin P. P. Sadguru Jagjit Singh Ji Maharaj would be to further promote the cause of Goraksha and other activities for the cause of “Bharat Mata ki Jai” that were so dear to his heart and for which he was always proactive, committed and dedicated.

We pray to Sachchidaananda Paramaatmaa to accept this great should in his eternal abode and also give strength to you and all other members of the be­reaved Namdhari Parivar to bear the irreparable loss !

Deepest condolences to our Namdhari brothers and sisters ..Condolences
Gurfateh
I and the whole of the Baba Darbara Singh Akhara offer our deepest condolences to our Namdhari brothers and sisters upon the passing of their Satgur Jagjit Singh. The passing of such a great Sikh holy man and human being who did so much good for humanity and Sikhi leaves the world all the poorer. I count it as a great honour that I was able to have the blessed sight of the holy one and get his blessing. May Satgur keep showering his blessings from Sach Khand upon all those who love him.

It was about midday and the sun was shining outside the hall. Inside, there was no special light that would make him look as he was made of soft gold. Gradually he walked to the raised dais and sat down. Apart from his compassionate face and hands, his body was covered in his usual white clothes.

He gave darshan for more than an hour while holy scriptures were recited and sacred songs were sung. The entire time, I could not really see the detailed features of his face although I was sitting in the front row at his sacred feet. All I saw was a very gentle golden glow. Finally, I gave up trying to see his face and looked down at the ground in front of him.

Inside my head, I felt someone laughing. “Acha, hun dekh lai” (“Ok, now you can see”). I looked up and I saw his face. The glow was around his face and no longer on his face. He was smiling. I do not know whether he was smiling at me. I do not think so because there was no reason for him to look at me. I was just one of the many people sitting in the front row. But it felt real; just like he was smiling directly at me. However, I do not think he ever turned his head in my direction.

It was a strange and wonderful feeling. I remembered a story my grandmother told me when I was a boy. In that story, each Gopi in Lord Krishna’s village used to feel as if Lord Krishna was with her even when he was not physically there. My experience with Satguru was similar. He was smiling and playing with me inside my mind even without looking at me. He did so even though he did not know me at all.

I had come for darshan because of a friend who said, “Do you know that God is living on earth in human form at this time. He is Sri Satguru Jagjit Singh Ji. You should go to seek his darshan. People say that whoever has the good fortune to have his darshan is released from the coils of human bondage and suffering forever.”

I felt very elated at this good news and quickly sought Sri Satguru Jagjit Singh Ji’s holy darshan. I felt like a child again who had found his parent after a long absence. I can only thank Satguru for his silent compassion. Sometimes, I still feel as if he is laughing inside my head. 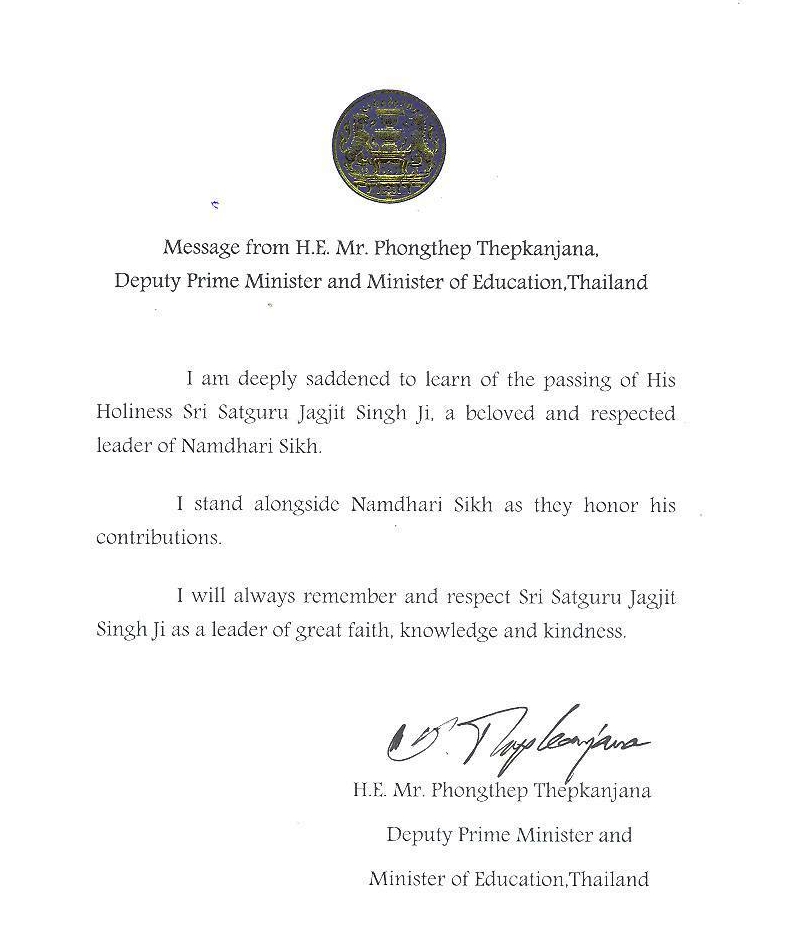 Satguruji has BLESSED many many millions and among those lucky ones was also me….

Every moment spent in His presence is unique, special and precious. But there are some moments I would like to share with you.

We were on our way from Mandi (H.P.) to Delhi when on the way at kiratpur I was struck with high fever and vomiting because of malaria and was immediately hospitalised. Docotors said I was serious. In the hospital room, I suddenly saw a lot of light and my eyes started blinking. When i tried to see properly. I could see back of someone wearing white Namdhari style Kurta Pyjama and white turban, trying to adjust the rod of tube light because of which light in the room was increased to this extent. When I told the same to my mother, she said there was no one in the room except the doctor, herself and me. At that moment my health started improving. He gave light of life to me. Who else, could he be ? Dhan Shri Satguru
Jagjit Singh Ji

He can’t see his Kids in pain and when He speaks our mind our trust becomes stronger & faith turns blind.

This following incident I can never forget in my life:

Satguruji was to come to my (taayee Ji) aunt’s house. It was my hindi exam next day but I was least bothered about that. While dressing up to go, I was thinking that why don’t Satguruji smile at me? Talking to myself I said Satguruji why don’t you call me and say something? If not about myself Satguruji please ask me where was my mom and I’ll reply that she is in Ponta Sahib to see my (mamaji) uncle as he was not. Well with all these thoughts running in my mind, we reached there.

Satguruji arrived. I was standing at back. Satguruji waved His hand towards me & smiled majestically at me. I was elated, on top of the world. I went forward with a red rose in hand, bowed my head at feet (His CHARAN). A Lot strange feelings were going on in my heart. Satguruji looked at me and smilingly said “Tussi Jamna-paar walle ho” (you are from across the Yamuna?) I said “Hanji” (yes). And my happiness knew no bounds. Then He asked “Mata kithey hai?” (where was my mother).

I was SURPRISED, ELATED MY EYES FILLED WITH TEARS when I HEARD THE SAME WORDINGS FROM SATGURUJI’S(MUKHAARBIN), AS I WAS THINKING IN MY MIND AT HOME WHILE DRESSING UP. With tears on the cheeks and a shaky voice I replied “Satguruji oh te Ponta Sahib gaye ne. mamaji da pataaa lein.” (Satguruji my mother has gone to Ponta Sahib to see my uncle as he is not well). This was the wordings that I was rehearsing again & again in my mind while dressing up. He again asked “Tussi kalaey Aaye ho ?” (Have you come here alone?).

I WAS NUMB COULDN’T REPLY ANYTHING. I WAS QUIET. I WAS  .. (can’t express). My (taayiji) aunt replied “Ki saade Naal aayi hai.” (She has come with us. Then listening her I replied the same. Satguruji nodded and smiled at me continious. He knows our mind. He hears our inner voice.
We Are Thy Part
We can’t Be Apart.