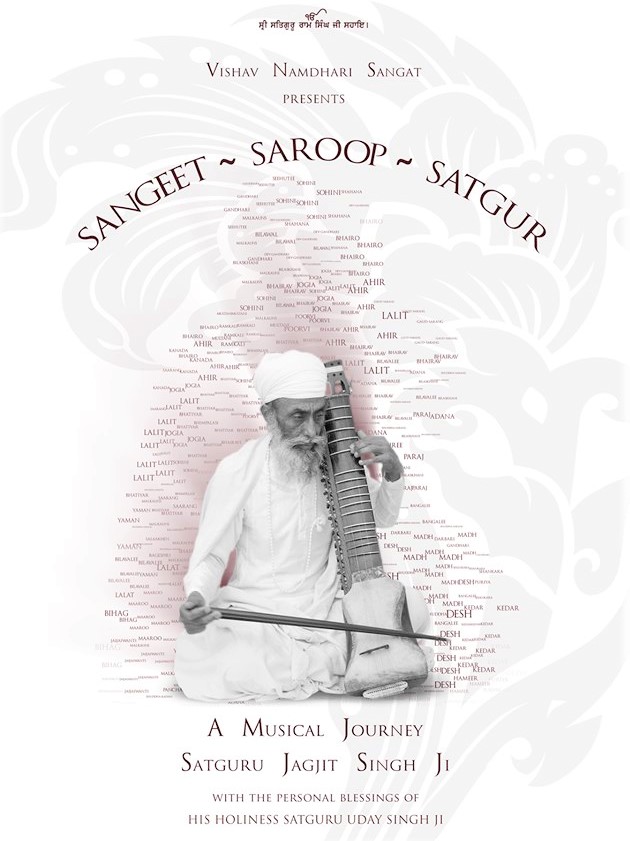 It was a star stuffed affair at the premier of Taranjiet Singh Namdhari’s documentary ‘Sangeet – Saroop – Satgur’ which showcases the work done by Satguru Jagjit Singhji in mobilizing every youngster from a village called Bhaini Saheb in Punjab to learn classical music for 100 years. Present at the premiere was the current master of the Namdharis  – Satguru Uday Singhji along with Ustad Zakir Hussain, Pandit Shiv Kumar Sharma among others.

The documentary portrays the impact of music and a 100-year-old legacy. Narrated through incidents by industry stalwarts who have promoted and catalyzed the process by imparting their knowledge to village children, filmmaker Taranjiet Singh Namdhari depicts one of the most astounding stories of a true patron of classical music.

“Very few maestros have had such an impact on our generation in all spheres of life, on music, on spirituality or on life in general, educating everyone as to how they can lead an ideal life specially though the field of music.

The blessings that Satguru ji gave us artists cannot be found in another parallel in this life or era of ours”, said Ustad Zakir Hussain.“Satguruji’s efforts will be written in the annals of history with gold. His rhythmic play of the tarab on the Dilruba was incomparable”, said Pandit Shiv Kumar Sharma.

Satguru Jagjit Singh was one of the biggest patrons of classical music in India and his love and dedication for it has inspired many a musician around the world. He believed that learning classical music everyday instills a certain discipline and focus in an individual, which is necessary right from childhood.

As a young adult, he made it compulsory for all children in Bhaini Sahib to learn classical music.The current master of the Namdharis – Satguru Uday Singh, has taken forward the tradition with equal vigour after Satguru Jagjit Singh passed away in 2012. From Bismillah Khan, Kishan Maharaj and Vilayat Khan to Pandit Shivkumar Sharma, Ustad Zakir Hussain and Amjad Ali Khan, the tradition has attracted many a music maestro to Bhaini Sahib to impart their knowledge to the children.

The documentary is a musical journey that discovers the hidden gems of Sri Bhaini Sahib, and the mesmerizing story of Satguru Jagjit Singh that has remained untold.

The Making of ‘Sangeet Saroop Satgur’

Music meant everything to Jagjit Singh, the documentary informs us. “After independence, music came into the democratic domain and the royal patronage ceased to exist,” santoor player Shivkumar Sharma says in the film. “The government did not take any initiative to safeguard the artists or reassure them, neither motivated students to learn – there was no vision. Under these trying circumstances, Satguru ji emerged.”

The documentary reveals how Jagjit Singh, a talented musician himself, built sustained collaborations with artists, organised concerts for them and helped each of their gharanas flourish. The list of artists he worked with is long and celebrated: among them, Amjad Ali Khan, Shivkumar Sharma, Zakir Hussain, the vocalist duo Rajan and Sajan Mishra, kathak veteran Birju Maharaj and vocalist Kaushiki Chakraborty. Jagjit Singh, who died in 2012, also sponsored music and dance lessons for young men and women from the Namdhari community and sent many of them to the homes and schools of his famous artist friends.

Filmmaker Taranjiet Singh, who also hails from the Namdhari community, initially knew of Jagjit Singh only as a spiritual leader. “It was in 2002 when I visited Bhaini Sahib [the headquarters of the Namdhari sect] hoping to make a small documentary about the place that I came across a vast archive of audio and video material related to Jagjit Singh and his relationship with classical music,” Taranjiet Singh told Scroll.in. “I started to then sift through the unclassified material and even had the opportunity of meeting Satguruji. That’s when I realised that there is so much that I don’t know about him. That’s one of the reasons I wanted to make this documentary. Most of us easily slot such people in the religious genre, but I wanted to bring out this whole other facet that he had – this deep and enriching connection he had to the classical arts.” Jagjit Singh’s expertise in Hindustani music is evident in the scenes in which he can be seen throwing musical curveballs at his students and sometimes at the artists themselves. “It was music that brought these artists and Satguruji together,” Taranjiet Singh said. “It was not about him being a spiritual leader or someone who had the resources to organise concerts. The artists and he were talking the same language of music. What he brought to the table was creativity and an environment that was positive and full of energy.” Taranjiet Singh also interviews many of the artists featured in Jagjit Singh’s recordings.

They speak of what the Sikh guru meant for them, both as a patron and a musician. “When I went to interview Pandit Shivkumar Sharma, I carried the recording of his concert and interaction with Satguruji,” Singh recalled. “The idea was to play it in front of him and get the conversation going. But Sharma didn’t need the recording to remember his interaction with Satguruji. He said there are two ways we can go about this interview – you can play the tape or you can hear me tell you what is in that tape.”

Taranjiet Singh Namdhari is a film editor by training. His credits include Dilwale Dulhaniya Le Jayenge (1995), Kuch Kuch Hota Hai (1998) and Mohabbatein (2000). He is also the director of the 2019 film The Great Indian Escape: Khulay Aasman Ki Oar.

His editing skills came in handy while making Sangeet Saroop Satguru. “Unlike the process where you write a screenplay and then you shoot it, here I had material and I had to, as an editor, put it in the format of a screenplay,” he explained. “What was remarkable was that Satguruji himself had the presence of mind back in the 1970s and ’80s to tape the concerts he organised and even the conversations he had with many of the musicians. So my first challenge was to hear and watch all the material that was in front of me and classify it.” Sangeet Saroop Satgur will soon be released across select cinemas in the country.

In September, Singh plans to release a longer version, comprising five 55-minute episodes, on the video sharing platform Vimeo. “What I want audiences to take away from this film is the idea that here is a working model of musical patronage and learning that can be adapted to other places as well,” Taranjiet Singh said. “If you look at what Satguru ji from a slightly panoramic point of view, the entire endeavour was also about preserving, documenting and nurturing one’s culture.

The concerts were all crowdfunded by members of the Namdhari community. Some of them also funded train trips for some of the students to ensure they could learn music in Bombay and other cities. If one person could make this happen, why can’t the others?”

Show more
Show less
The Art of Listening
A documentary explores the legacy of the late Satguru Jagjit Singh Ji and the lasting relationship between the Namdhari Sikhs and Indian classical music.

We’d wrapped up a show in Hyderabad and we had a performance the next day in Aurangabad. The journey was by road and it was such a long one that our driver was falling asleep at the wheel. I decided to drive the car, and it took us several hours to reach the venue. When we reached, we saw the audience was already present, and we washed our faces and went on stage, and began playing. Oh, what an excellent show it was!” says Ustad Zakir Hussain, reminiscing about the first sangeet sammelans organised by the late Satguru Jagjit Singh (1920-2012) and the Namdhari Sikhs, back in the 1970s. Hussain had a flight to catch but there was no way the maestro was going to miss the premiere of Sangeet – Saroop – Satguru: A Music Journey of His Holiness Satguru Jagjit Singh Ji, held in Mumbai a little while ago. “Satguru Jagjit Singh Ji would conduct sessions where all the classical musicians of different gharanas would gather together. When he lived, it was a moment in time when art was supreme,” he adds.

Conceived by Taranjiet Singh Namdhari, nearly two decades ago, the documentary is a labour of love. “As a Namdhari, I was always aware that Satguru Jagjit Singh Ji was our religious leader but for the most part, I’d been trying to escape that side of my background. But in early 2000, I visited Bhaini Sahib (the village in Ludhiana district, which is the seat of the Namdhari Sikhs) for the first time as an adult. I wasn’t going through a great patch in my life and I wanted to connect with my roots. After I met him, I felt that I should make a documentary about him,” says Taranjiet, 48, who made a career for himself as an editor in Bollywood, working on films such as Mohabbatein and The Great Indian Escape, and designed visual promotions for blockbusters such as Dil Toh Pagal Hai and Kuch Kuch Hota Hai.

At Bhaini Sahib, he found a treasure trove — 8 mm and 16 mm films, a large number of audio cassettes dating back to the 1970s-80s — but with no way of knowing what was contained in those reels and tapes. “I went through them and saw that over the years, musicians such as Ustad Alla Rakha, Ustad Vilayat Khan and Pandit Ravi Shankar had travelled and performed at Bhaini Sahib. Satguru Ji’s foresight resulted in history being recorded. I started digitising whatever I could,” says Taranjeit, adding, “Watching those tapes, I realised that this was not just about performances, but something larger was at work here. In 2007, I decided that the documentary would be about the relationship between Satguruji, Bhaini Sahib and music.”

The documentary begins with a brief history of the Namdhari Sikhs, especially of Satguru Partap Singh. “The Gurbani is written in different raagas, and he brought singers and musicians to the village to learn how it should be sung. Satguru Jagjit Singh Ji was brought up in that environment,” says Taranjiet. When he became the spiritual leader of his people, Jagjit Singh Ji carried forward his father’s legacy and invited notable musicians to the village. “He understood that listening is learning, and that while music helped one practice discipline and focus, it was also a way to look inward. Post-Independence, there is no one who was a patron of Hindustani classical music in the way he was,” says Pandit Shiv Kumar Sharma in the documentary. Pandit Rajan and Sajan Mishra agree, they owe a great debt to Jagjit Singh Ji. “Panditji was working at the time, he was yet to become famous. Satguru Ji asked him to leave his job and gave him a monthly stipend so that he could focus on his craft. Later, Pandit Sajan Mishra joined his brother in Delhi from Varanasi. Soon after, they had their first performance on AIR,” says Taranjiet.

Throughout the two-hour-long documentary, musicians like Hussain, Sharma and Ustad Amjad Ali Khan mention how Jagjit Singh Ji was an accomplished singer and musician himself. “Especially dhrupad,” says Taranjeit, “it’s slow in tempo, one pays attention to the words, the cadence, in a way that khyal does not.” “He played the dilruba with such mastery, in a way that was unique to him,” said Sharma at the premiere.

Taranjiet hopes to do a limited release of the film in cinemas in Punjab, Haryana and Himachal Pradesh. “Those are the places where most people will know about the history of Satguru Ji. We’ve also done a five-part series, each is 55 minutes long, from the film and we hope to release it online in October. In addition, the musicians featured in the documentary will be screening the film at their respective institutions, starting with the Ustad Alla Rakha Institute of Music in Mumbai,” says Taranjeit.