The Rain In England

Pundit Gopal Singh Ji accompanied Sri Satguru Jagjit Singh Ji to London in 1976. It was extremely hot then with no sign of rain or water. The people were in great agony. This is how Punditji tells the story of the time when Satguruji blessed (the people of England) with rain:

Punditji went to London with Sri Satguru Ji. The London-based Namdhari Sikhs had also earlier called upon the Satguru at Sri Bhaini Sahib via phone and requested “Patshah Ji, give us Your Darshan in England and bless its people.” Acknowledging the request, Patshah Ji went to London. He was bound to go there anyway because the people of that land were praying at His Feet. The first Guru of Kalyuga, Guru Nanak Dev Ji, also did the same when Vali Kandhari did not share the water he had with the people. So Guru Nanak Dev Ji Himself went to the foot of the hill upon which Vali Kandhari lived. Quenching the thirst of Mardana was just an excuse. Who knows how many peoples’ thirsts He quenched then? Hence the Guru went there to quench the thirst of the suffering people.

Similarly, hearing the prayers of the people of England, Gareeb Nivaj (Supporter of the poor), the Heir of Guru Nanak Dev Ji’s Throne, Sri Satguru Jagjit Singh Ji set out on a crusade to England. There many highly acclaimed saints had prayed and held Divans at the `Mangat Hall’ in the hope of bringing rain. But nothing happened. The officials there had immediately put the Photo of Satguru Ji on television and announced that the Guru of Namdharis was arriving from India, and that He would bring the rain. Those people (who did the announcement) thought that like the rest of the `Saints’ and `Sages’, HE (Satguruji) would also leave after being unsuccessful. The Namdharis who call Him `Guru’ will be all disgraced. But what do those poor people know of the Avatar of Akal Who has come to remove sorrow and suffering of the living-beings?

Sri Satguru Jagjit Singh Ji gave Darshan at the `Mangat Hall’. A Divan was held. At the end of the Divan, some people, including Britons, approached the Satguru and requested “O, Supporter of the poor, whatever it takes, please bless us with rain.”

Morning came, Asa Ji Di Vaar’s Bhog (Conclusion) was done. Pundit Gopal Singh Ji was given the Hukam (Order) to perform Ardas. Punditji did the Ardas “O, Akal Purakh! Sri Satguru Sachay Patshah Jio, At Your Feet It Is Requested That The Rain May Fall. Do Shower Your Blessings. Forgive The Beings Of Their Sins And Be Kind To Them. Men And Animals, Trees And Plants, All Are Suffering Without Water.” 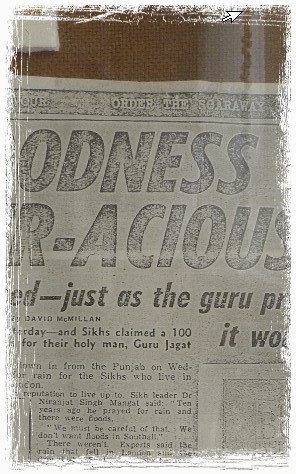 The Ardas was performed at about seven o’clock in the morning. Gareeb Nivaj Sri Satguru Jagjit Singh Ji had showered His blessings in such a way that it started drizzling within fifteen minutes and later it rained so much as if there was not going to be an end to it. It was as if the God of Rain, Inder Devta, was standing before Sri Satguru Ji with his hands tied. The Britons were dancing in the rain. Patshah Ji was addressed as `Rain God’ and `Rain Maker’ by them. On every television channel and every newspaper was seen the headline that the
Guru of Namdharis, Sri Satguru Jagjit Singh Ji, Who traveled from India was responsible for the rain. Where ever the Britons see Namdharis walking by, they’d say “They are the ones who brought rain.” Great indeed is Sri Satguru Jagjit Singh Ji Maharaj. It rained so much that there was no ending! For over twenty days the rain poured down. Gareeb Nivaaj Ji was approached the second time because it had rained so much in England that flooding had started to become a problem.

From there, Patshah Ji went to Africa. Some journalists there approached Him and asked “We have heard that You had brought rain to England.”

“Mein Kaun Ha Meeh Puaun Vala?” [“Who Am I To Make Rain Fall?”] Came as a reply from Patshah Ji in such a humble way. There was absolutely no sign of pride in His Words. Even after showering such great blessings, He did not want to make Himself known. It is indeed the way of Akal Purakh how Satguru Ji answered (the people’s) prayers and with His Will the rain also stopped. Inder Devta, Agni Devta, Paun Devta, all are at His commands.