Roop Rab Da – A Divine Embodiment
Roop Rab Da…, is an emotional journey down the lane with His Holiness Satguru Jagjit Singh Ji. Featuring a poem written by Harpal Singh Sewak, during the soulful time at the Hospital in Bangkok where Satguru ji was admitted in February 2006.
Perfomed emotionally by Huzuri Ragis – Balwant Singh(Vocals), Harpreet Singh Sonu(Tabla) and Davinder Singh(Dilruba) in the form of a Poem – Shabad, the 16 minute presentation takes one through Satguru Ji’s travel to Africa, Dubai, Bombay, Hyderabad, Bangalore, Bangkok, Delhi and back to Bhaini Sahib in February 2006. It also features the miraculous feat of Satguru Ji singing hymns and bandishes from the Gurbani and Hindustani Classical at the Hospital in Bangkok.
The next 30 minutes feature Rubaiyan written by Pritam Singh Kavi and performed by Huzuri Ragis “Harbans Singh Gulla (Vocals) and Davinder Singh (Dilruba). These have been Edited and Composed to take one back in time, with footage filmed on 8mm and 16mm starting from 1959 till the early 1980’s, presenting Satguru ji’s various tours from then to Africa, UK, Bangkok, Bangalore, Jeevan Nagar, Sant Nagar etc, Various Holla Mohalla’s and Jap Prayogs.
For the first time ever early exclusive footage of Satguru Ji playing the Dilruba in a style matched by none but himself. Singing Gurbani in Dhrupad one of the oldest form of Classical Hinduatani Music.
All these sprinkled with Satguru Ji’s Speeches and Updesh given time to time by him at during various tours and at various functions.
The last 10 minutes feature Satguru Ji himself singing Shabad during Asa-Di-War (Dilruba and Dholak accompaniment) and also during a Diwan.Filmed by Huzuri Sewak’s Racchpal Singh, Harpal Singh and Gurmukh Singh, Edited and Directed by Taranjeet Singh, whose previous presentation was Sarab Kala Samrath a documentary on Satguru Jagjit Singh Ji’s life, “Roop Rab Da” is an emotional journey reminiscent of the times and the miracles of our present day leader His Holiness Sri Satguru Jagjit Singh Ji. 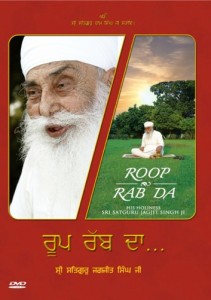