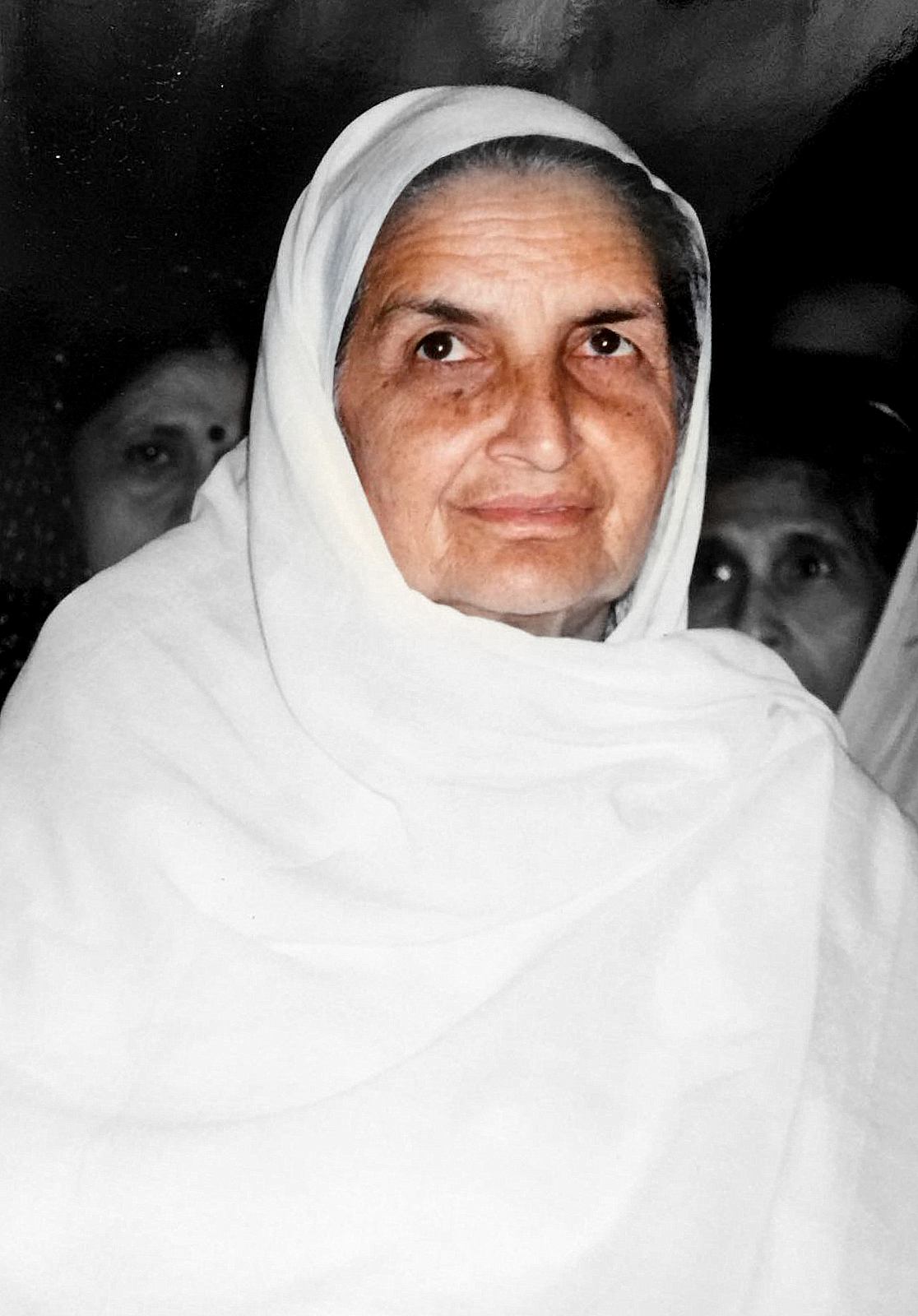 Mata Chand Kaur Ji, wife of  late Satguru Jagjit Singh Ji, was on Monday 4 April 2016 shot dead by two unidentified bike-borne assailants at the Bhaini Sahib Gurdwara complex. The attackers opened fire at Mata Ji, 88, from a close range at the entrance of Satguru Partap Singh Academy — a school run on the Gurdwara premises — around 10 am.

Mata Chand Kaur had come to the school to attend Ardas and inaugural ceremony on the first day of the new session. As she came out of the academy in an electronic golf cart, a youth approached her and bent down to touch her feet. Suddenly, he took out a pistol and fired two shots at her and fled along with his accomplice on a bike. Mata Ji who suffered bullet injuries in the head and abdomen, was rushed to the Apollo hospital where she was pronounced dead at 2 pm. The cremation was be held at Sri Bhaini Sahib at 2 pm on Tuesday, 5th 2016. Her bhog ceremony was held at the same place on 10 April 2016.

After Patsha ji merged with the light in 2012, the sangat found solace at the feet of Mata Chand Kaur ji.

The day at Sri Bhaini Sahib dawned at her door. Early in the morning, devotees waited for her darshan. When she emerged out of her room to go to Asa di Vaar, the waiting devotees felt blessed by her appearance.

Seated on a divan, she was surrounded by a group of devotees and relatives. Mata ji’s grandson Jai Singh introduced me as the writer from Bangalore who would be writing a book on Patsha ji. She bestowed a graceful smile on me. I had expected to meet an old lady, withdrawn and quiet. On the contrary, Mata ji showed keen interest in what was going on. Even though we belonged to different cultural backgrounds and languages, it was not a barrier. Mata ji was very welcoming and we carried on the interview through interpreters. She enjoyed the conversation and was very unassuming when others spoke about her seva and contribution to the sangat. They praised her capacity to inspire people to work together. Majestic buildings such as Ram Sarovar, Partap Mandir in Sri Bhaini Sahib stand testimony to her hard work and commitment.

Mata ji quoted her father-in-law, Satguru Partap Singh ji’s advice:
“Bibi, Guru ghar di seva karo” and said that seva was her goal in life.
When I asked her:
“Mata ji, please speak on your likes and dislikes.”
The answer was straight and simple.
“Whatever Patsha ji liked, I like, whatever he disliked, I dislike.”

With her, there was no question of “I” or “Mine”, no separate entity, it was total merger and oneness with the Satguru. I realised that it is this submission and surrender to Satguru which empowered her. At the end of the brief interaction, my preconceived notions of a very submissive and traditional woman disappeared. This matriarch, the mother of the entire Namdhari sangat was a strong woman who commanded respect and was a leader in her own right.

When Patsha ji was 25 years old, he lost his first wife, Mata Rajinder Kaur ji, daughter of S. Udham Singh of village Kalu Vahr, Hoshiarpur. After a year, Patsha ji’s father Satguru Partap Singh ji, decided to get him married again. Satguru Partap Singh ji spelled out his expectations of a woman who would marry his son: “I want my daughter-in-law to serve the sangat. Her hands should be covered with the sand used to clean the plates of devotees at langar. She should seek satisfaction and salvation through serving people.”

Satguru Partap Singh ji found such a daughter-in-law in Mata Chand Kaur ji. Mata Chand Kaur ji was born in 1932 as the eldest child of Sarwan Singh Siddhu and Mata Sama Kaur in the village of Buraj Tharor, Bhatinda, Punjab. Her maiden name was Kartar Kaur. She hailed from the family of agriculturists and even as a child was diligent and hard working. She grew up with her three brothers and two sisters and was trained in all household work. She had a religious bent of mind and in 1945, Kartar Kaur had come to Sri Bhaini Sahib to perform jap paryog. It was at this time that she caught the attention of Satguru Partap Singh ji who was happy to see the young girl sincerely involved in serving others.

After the wedding, Satguru Partap Singh ji changed the name of the bride Kartar Kaur to Chand Kaur as the wife of Satguru ji’s younger brother Maharaj Gurdial Singh ji was also Kartar Kaur. He felt that two women with the same name in one household could cause confusion. Satguru ji could not have chosen a better name.

The bride was as beautiful as the full moon and complemented the life of Patsha ji just as the moon complements the sun in providing the light to the world. The years 1946 and 1947 were days of political turmoil. Baba ji was involved in seva day and night, rehabilitating the refugees uprooted from Pakistan. Chand Kaur ji the new bride followed her husband to Sri Jiwan Nagar and joined hands in serving the stream of refugees who poured into Sri Jiwan Nagar. She worked round-the-clock in the langar and construction sites. She did not hesitate to dirty her hands and clothes by working in the fields or laying roads. She assisted her husband in distributing food and clothes to the refugees.

The first thirteen years of her married life were dedicated to fulfilling the wish of her father-in-law. She immersed herself in serving the sangat. In 1959 when Patsha ji ascended the gaddi and assumed the responsibility as the supreme head of the Namdhari sangat, Mata Chand Kaur ji occupied the elevated role of the Mother of all Namdharis.

On 25th December, 1962, Mata Chand Kaur ji gave birth to a baby girl. The child was named Sahib Kaur. She brought cheer and happiness to the entire sangat. As the fame and responsibilities of Patsha ji increased, Mata Chand Kaur ji began to share a lot of his burden, especially in the area of seva and construction of buildings at Sri Bhaini Sahib, Sri Jiwan Nagar, and Mastan Garh. Satguru Jagjit Singh ji groomed Mata Chand Kaur ji into a fine leader who was an effective team player. She inspired others to work as she led by example and never shirked hard work.

Mata ji served the langar or the community kitchen for seventy long years. When a project of Rupees fifty lakhs had to be completed, Satguru ji would give her seed money of Rupees five lakhs and ask her to get started. Mata Chand Kaur ji would never grumble or object. She was sure that with Patsha ji’s blessings, she would be able to manage the funds. She also knew that Patsha ji would not brook any delay and His grace would always be there with her. She would discuss the project with her team and would launch it – the schools, residences and other
buildings in Sri Bhaini Sahib were built this way.

Mata Chand Kaur ji took special interest in educating the young girls. She got them trained in tailoring, making mala, cooking and cattle rearing. Chanting of the Gurbani and scriptures too formed part of their education.

As the Satguru’s wife, she travelled widely with Patsha ji and was very knowledgeable in matters of the world. Till her last breath, she actively directed and managed the running of the langar, old age home and cattle sheds. Her faith in the healing power of prayers is well known. While Patsha ji religiously took whatever allopathic medicines were prescribed to him, Mata Chand Kaur ji would rely on home remedies and prayers and stealthily throw away the tablets given to her by the doctor.

Once at Mastan Garh where construction work was going on, some women told Mata ji that there was shortage of milk. She assured them that Satguru ji would bless them with so much of milk that it would be difficult for them to consume it. Within a few days, a buffalo yielding 20 kgs of milk was brought to Mastan Garh and Mata ji’s words became true. Mata ji was herself fond of milk and loved to distribute milk and eatables to women and children.

The elders at the old age home were also fortunate to enjoy her hospitality. Mata ji was first and foremost a devout wife and disciple of Satguru ji. Her life was entirely devoted to serving her Guru and the sangat. Mata ji led a very disciplined and austere life. Every day she would get up at three o’clock in the morning, take a head-to-toe bath and perform naam simran. She performed yoga and was health conscious. She would take a walk around Ram Sarovar in the mornings.

Mata ji used to eat sparingly. Like Patsha ji, till 1991 she took only one meal a day. When Patsha ji started taking two meals a day as per the advice of the doctors, Mata ji too started having the second meal consisting of milk, vegetables and fruits.

Mata ji kept herself active throughout the day. She could perform non-stop seva for long hours. She would sit in the langar and supervise that everything went well. I was surprised to learn that Mata ji, at the age of eighty-five, used to personally attend to details of furnishing the newly-constructed residence of the Guru at Sri Bhaini Sahib.
She would take care of the needs of the Sikhs and the families living at Sri Bhaini Sahib. She would visit the goshala and could be seen milking the cows. Once when Mata ji suffered from fever, the doctor advised her to take bed rest. But Mata ji was seen working in the langar. When someone asked her why she was straining herself, Mata ji replied politely: “I remain fit if I perform seva.” Patsha ji said: “My wife does lot of seva but does not advertise it.”

Sri Satguru Jagjit Singh ji was the sun and she was the moon whose life literally revolved around her husband, who was first her Guru. She, as a disciple and wife, received light from Him and reflected it on the community in the form of seva and compassion. The journey of this noble soul came to an end on 4th April, 2016 and the entire Namdhari sangat felt orphaned at her demise. When the soul bride meets the Lord husband, that is God, When the Ganges joins the Ocean, the story seems to end, Separateness is over, but the saga continues to flow as one.